By Stan Freese and Scott Wolf

Over a decade ago I interviewed Stan Freese for Mouse Clubhouse. At the time, Stan was the talent booking director for the Disneyland Resort.  He shared fascinating stories about his time at Disney, starting as the first leader of the Walt Disney World Band in 1971, but Stan was also telling me stories that he didn’t want out while he was still working for Disney.  “Don’t use that!” he told me. “We’ll publish them when I retire!”

Stan is now retired and he asked me to help him write his story!  His very colorful life will be detailed in the upcoming Stan Freese autobiography, “Music, Mayhem, and the Mouse”.

MUSIC, MAYHEM, AND THE MOUSE
In Music, Mayhem, and the Mouse, Stan Freese tells the story of his wild life. Taking up the tuba on a childhood dare led to a four-decade career with Disney, ultimately becoming the Talent Booking Director at Disneyland. He always managed to have the time of his life despite struggling with the mayhem caused by alcoholism.

Stan’s life is a lot like his tuba playing, filled with unprecedented variety. He has performed jazz in strip clubs, and classical music for international dignitaries and in command performance at the White House. He was a regular guest performing country tuba songs on the “Hee Haw” television series, and played in punk rock concerts with The Vandals.

Although Stan should never have led the Disneyland Band down Main Street in his bathrobe, he was not to blame when he unknowingly ingested marijuana and got high moments before he was to conduct a Disneyland Band concert. Before his sobriety, the craziness of his life made it hard to determine what was fueled by alcohol, and what was just Stan.

Throughout it all, Stan consistently strove to serve the public, such as working with the United States Army School of Music, championing for women entertainers at Disneyland, and establishing a program that brought music education to millions of elementary school students.

This is the colorful story of a man whose life was completely filled with music, mayhem, and the Mouse.

For updates about “Music, Mayhem, and the Mouse” email me at info@mouseclubhouse.com. 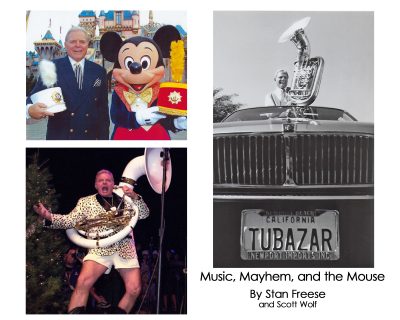